skip to main | skip to sidebar

Benefits of Occupational Therapy for Older Adults with Dementia 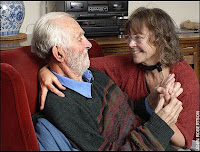 Dementia is defined as a loss of mental functions such as thinking, memory, and reasoning that can interfere with a person’s daily activities (WebMD). There are many diseases that can cause dementia but the most common and debilitating cause is Alzheimer’s disease.  Dementia is estimated to affect 5-8% of the elderly population over 65 and over 50% of older adults in their 80s. A recent study published in The Journals of Gerontology reveals several benefits that community occupational therapy can have on dementia patients and on their caregivers.

The participants in this study consisted of community-dwelling patients who were aged 65 or older and had mild-to-moderate dementia. The patients were randomly assigned to either the intervention, which included providing the patient with occupational therapy sessions at home, or the control group, which received no occupational therapy. The therapy sessions consisted of compensatory strategies to adapt a person’s daily activities with their level of ability and environmental strategies in which the therapist modified the patient’s environment to allow them to be more successful with their disabilities.

These results could prove very helpful to both patients and caregivers of individuals suffering from dementia. This can provide hope to families who are feeling the devastating affects that the disease has caused to their loved one as well as to the rest of the family. Although the occupational therapy program does not promise a cure from dementia it helps both caregivers and patients learn on how to adapt one’s life around the symptoms. The therapists provide the tools for these individuals to live healthier lives with their disability.

BK
I am currently a junior majoring in Occupational Therapy at the University of Southern California. I am very interested in studying the affects of aging as well as how participation in meaningful activities could benefit one's overall health and well being. I hope that by writing this blog I can shed light on the growing field of occupational therapy and how older adults can greatly benefit from it.